In Between Time - choreography by Tony Powell 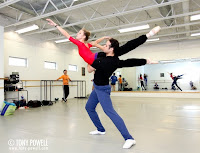 In Between Time-choreography by Tony Powell
February 4, 2010-Studios of The Baltimore Ballet
by Heather Desaulniers

“When reviews bother me it's because the journalists are reviewing a dance that they wished had happened instead of the one that existed.” (Speaking of Dance: Twelve Contemporary Choreographers on Their Craft, Joyce Morgenroth, New York: Routledge, 2004, 178).

A few months back, I stumbled upon this quote and its truthful bluntness has haunted me ever since. Today's dance reviews are heavy-laden with 'I' statements: 'I wanted'; 'I wished'; 'I remember when'. Commentary has become less about the piece and more about the writer. We let our opinions cloud our judgment, we revel in our own theoretical acumen and we can hold a grudge like you wouldn't believe. Having said that, I don't think that writing's downward spiral is entirely our fault. Thoughtful critique requires significant access to the work and, in dance, that is rare. Our exposure to each individual piece is incredibly restrictive; we see most performances only once, maybe twice (though unusual). This limited window of observation is contributing to reviews that are less than rigorous. A fleeting glimpse does not facilitate perceptive nor genuine reflection. 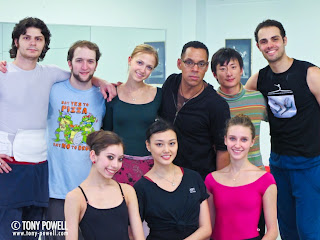 ographer Tony Powell generously welcomed me to a rehearsal of his new work, In Between Time, which will be part of The Baltimore Ballet's 10th Anniversary Gala-March 28th at The Lyric Opera House. This invitation gave me both time and opportunity with the dance, and solidified my belief that critics must devote more effort to the 'work-in-progress' phase of choreography.

The day I was there, Powell was completing the middle section of the ballet: a pas de quatre for 1 woman and 3 men. The movement centers around the female dancer, Devon Teuscher from American Ballet Theatre, and follows an intricate system of layering as each man, one by one, enters the picture. The partnering and lifts are physically complicated because all three men have an active role in

Teuscher's support. Watching Powell, these four dancers, and the rest of the cast work through the choreography was a unique experience. It was an exercise of true community; a creative environment where the goal was to actualize Powell's vision. The atmosphere was happy, fun, while still being diligent, and I know from personal experience that rehearsals are seldom like that.

ehearsal process definitely helped me to understand the mechanics of this particular movement. But, more important, being there allowed me to see the piece multiple times, revealing a deep relationship between the composition of music and of dance. The score for this middle variation is Max Richter's "On the Nature of Daylight", a selection that exudes the feeling of traditional counterpoint. Powell's choreographic response was an equally rich contrapuntal statement. Teuscher was the cantus firmus; her choreography was the base; the necessary ingredient; the stabilizing foundation. As each of the men entered the dance, they embodied first, second, and third species counterpoint. Each of these choreographic lines had to be both independent and interdependent for the polyphonic texture to work. Each individual's choreography had to be significant enough to stand on its own, yet integrative enough to merge with the other three lines of movement. In Between Time is counterpoint done well, where each part is compelling and the aggregate picture is prismatic.

It's hard to say whether I would have made these connections if my only chance to see In Between Time had been in performance. I do know that my thoughts were clearer at the end of the rehearsal, after seeing the cast work, mark and dance the section several times. The repetition may not have been the only key to unlock the dance for me, but it certainly helped. 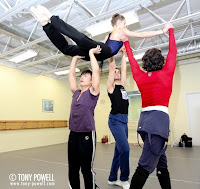 Clearly, my opening quote is a sweeping, simplistic generalization, but there is definitely truth to it. This comment confirmed and re-iterated that the theater is only one of the many places where dance critique should occur. The rehearsal studio needs to become the writer's research laboratory: a space to gather information, reach a deeper level of understanding, and prepare for reviewing work in its finished form. Critique should reflect conception, generation and production. But, this more holistic approach is only achievable when artists allow increased access to their creative process and critics commit more of their time outside of the theater.