The San Francisco/Bay Area dance scene unfolds year-round, with each month of the calendar offering exciting performances and awaited annual events. One of these anticipated moments comes every fall with the launch of Smuin Contemporary Ballet’s new season programming - three different mixed repertory bills that tour the Bay Area through June. Last weekend, the first of these played to a packed house at the Lesher Center for the Arts. And while there wasn’t a specific theme outlined for Dance Series 1, one certainly emerged over the course of the show: the deep and enduring connection between dance and iconic, legendary music and musicians.

Rex Wheeler’s Take Five, an ensemble work for ten set to a suite of Dave Brubeck selections, opened the celebratory afternoon with flair and gusto. Right from the start, jazzy tropes and nuanced poses imbued the entertaining romp: stretchy, elongated legs; grand floor slides; delicate, staccato jumps; and sinuous upper spines. Wheeler subtly incorporated postures inspired by musical instruments – hand motions that mimicked a piano, bodies transforming into upright basses. Like the ongoing pulse of the music, nothing onstage was static or frozen; kinetic energy was everywhere, though at the same time, choreographic busyness was avoided. And Take Five had a quintessential Michael Smuin-feel to it. I think the company founder would have been very proud to see the piece as part of the mainstage repertoire (this expanded iteration is a premiere, while the earlier edition was created for Smuin’s yearly choreographic showcase in 2018).

With its impressive technical unison, the men’s trio danced by João Sampaio, Peter Kurta and Zachary Artice, was definitely a highlight. As was Artice’s later solo, which captured the space with powerful jumps, sharp shapes and technique that was textbook exact without looking sanitized. Though Take Five had many of these special moments, the partnering struggled to combine passion with control and precision. And as with many dances that follow a suite structure, there were too many stops and starts throughout, which took away from Take Five’s overall flow.
In contrast, flow was strong in James Kudelka’s The Man In Black (2010), an emotionally charged quartet mining the musical canon of Johnny Cash. Performed by Artice, Tessa Barbour, Mengjun Chen and Sampaio, dramatic human themes abounded in this constant stream of consciousness. Right from the start, the idea of unsteadiness read clearly with harsh directional changes, off-centered poses and cantilevered balances. Framed by Cash’s expressive, often haunting vocals, bodies slumped over in moments of fatigue; images of self-harm screamed from the stage; exaggerated, slowed fight scenes emphasized violence; and manipulation took a seat at the table as the dancers took turns arranging and forcing each other’s limbs. So not a light work, to be sure (though some clever line dancing motifs did add a hint of levity from time to time). The Man In Black’s power, potency and unflinching nature, with equally powerful and potent performances, was undeniable, down to the final moments as, one by one, the three men exited the space to leave Barbour onstage staggering and searching for answers.

Dance Series 1 closed with Michael Smuin’s 1997 interpretation of Carl Orff’s famed Carmina Burana, which I’ve seen a number of times. Check out my previous thoughts and analysis at:

Mindfulness For Dancers
by Corinne Haas
published May 2019 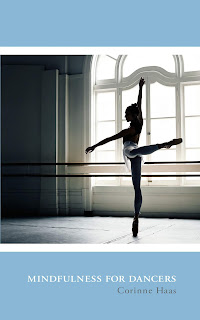 A profound message. A needed discussion that is largely absent from the zeitgeist. An interactive experience. A specific connection between two entities. All of these phrases aptly describe Corinne Haas’ new book, Mindfulness For Dancers, a selection that should be a part of every dancer’s personal library. Through approachable, caring and informative prose, Haas takes the common idea of mindfulness and applies it to the dance artist, revealing a deep conversation about the internal self in the midst of the studio, the mirror, the stage and company life. Gem after gem leaps from the pages, including the value of time and the importance of balance (something for which dancers have a unique understanding). It should be required reading in college and pre-professional dance programs.

Haas, a former professional dancer, has created a lovely duality in Mindfulness For Dancers - combining relatable story with individual exercises so that the reader can not only contemplate concepts but also build their own mindfulness resource kit. Each of the book’s four main sections includes Haas’ thoughtful, astute observations about grounding, empowerment, goals and intention, followed by suggestions for investigation and experiment. Each of these chapters - root, core, heart, crown – smartly links the emotional and the physical together (something that feels imperative for dance) and uses language that conjures other movement practices and traditions like Alexander Technique, Feldenkrais ATM and yoga.

Though Mindfulness For Dancers seems geared towards the young professional or pre-professional, anyone who spends time or has spent time in the studio will find its contents beneficial. 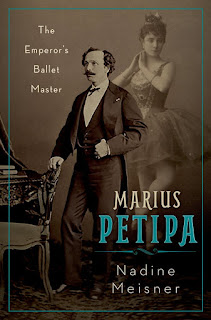 Any ballet fan is well acquainted with a particular program occurrence – a note indicating the evening’s choreographer, followed by “after Marius Petipa” in brackets. That is, of course, because Petipa (either alone or in collaboration with others) is credited with creating so many full-length narrative ballets including La Bayadère, The Sleeping Beauty, The Nutcracker and Swan Lake, just to name a few.

But if you want to take a deep dive into the life of the French-born man who became Russia’s leading dancemaker in the late 1800s, look no further than Nadine Meisner’s new book Marius Petipa – The Emperor’s Ballet Master, currently available from Oxford University Press. With attention to politics and world events, Meisner provides an encyclopedic portrait of this dance icon. Each chapter is incredibly thorough, meticulously researched, yet wholly approachable. And Marius Petipa – The Emperor’s Ballet Master is also delightfully devoid of the constructed affect and belabored prose that plagues so much academic writing.

Informational nuggets about Petipa’s personal journey, dancing career, choreographic canon as well as his onstage partnerships and complex offstage family abound everywhere. The throughline of Petipa’s excellence as a character dancer and his choreographic pull toward narrative ballets, replete with gesture and mime, is particularly powerful. As were the discussions surrounding musicality, musicianship and the integral components of the ballet à grand spectacle. And it was fascinating to learn that the dance notation lineage is far broader than Laban and Benesh.

I will say that Marius Petipa – The Emperor’s Ballet Master is not a short read (at least not for me) but if you are curious to learn more about the person, the artist beyond just seeing his name in ballet programs, read Meisner’s book. Maybe even before your annual sojourn to The Nutcracker this coming winter.