"Dances from the Heart 2"

On the last Sunday night in April, the San Francisco and Bay Area dance community gathered at the Palace of Fine Arts for “Dances from the Heart 2”. An eclectic and electric program of thirteen different works performed by eleven dance companies, the evening was presented by The Richmond/Ermet AIDS Foundation (REAF) to benefit Bay Area organizations committed to the fight against HIV/AIDS – this year’s focus being Larkin Street Youth Services, BAY Positives, and the Dancer’s Group’s Parachute Fund.

Ballet San Jose’s Rudy Candia and Alexsandra Meijer opened the first act with a lovely pas de deux by Sir Frederick Ashton (“Méditation from Thaïs”). An alluring yet difficult duet, the boureé-heavy choreography highlighted Meijer’s articulate and flexible arch. Next, Salsamania’s Latin Vibe Team burst onto the stage with the dynamic three-couple “Aun No Es Tiempo”. Sexy, hot and incredibly well-rehearsed, another equally vibrant team from this company also appeared in the second Act. The stunning Crystaldawn Bell danced an untitled solo by Robert Moses, specially created for this benefit performance. This work was a nice divergence for Moses; certainly a modern creation, but with definite neo-classical sensibility. As Bell moved in and out of several pools of light, Moses’ choreography accented and marked Paul Carbonara’s score, whether with a lift of the arms, a pop in the torso or a long extension in arabesque. An excerpt of “The Rambler” reiterated two enduring truths about Joe Goode Performance Group. Every company member is a quintessential and well-rounded performer, proficient in dance, voice and acting. And, Goode knows how to integrate all those entities together like no other, creating a true interdisciplinary sensation that makes sense. Post:Ballet offered a conceptual and technically demanding modern work (choreography by Robert Dekkers, danced by Christian Squires). Dekkers’ is never afraid to take ballet and contemporary syllabus into uncharted territory, which in “Sixes and Seven” was most readily apparent in the unbelievably smooth, yet super-human level changes. Act I concluded with parts of Patrick Corbin’s “For Use by Subhuman Primates Only”, performed by Company C Contemporary Ballet. This piece is a bit strange, but at its core, it is a work that communicates and celebrates the notion of community. And, community is really what “Dances from the Heart 2” is all about.

The six pieces that made up Act II illustrated the diversity that is Bay Area dance. From classical Indian Kathak to lyrical ballet to narrative Tahitian dance, there was something for everyone. Chitresh Das Dance Company introduced the detailed, fast-paced world of Kathak dance. From whirling pirouettes to subtle eye inflections to facial movements, “Malkouns Tarana” delighted the crowd. Diablo Ballet’s Robert Dekkers, Mayo Sugano and Hiromi Yamazaki took the stage in Trey McIntyre’s “The Blue Boy”, a pas de trois that combines the strength of ballet, the inventiveness of McIntyre and the uplifting music of Beethoven. The use of demi-pointe throughout the work was refreshing and the balancé section toward the end ate up space with its grand motion. ODC/Dance brought an excerpt of Brenda Way’s 2010 dance theater composition, “Waving not Drowning (A Guide to Elegance)”. Merging modern movement with multiple related narratives, the work examines the role of the individual within a collective, the deconstruction of the self and the passivity of society. Smuin Ballet contributed two variations from a larger work, Michael Smuin’s “Fly Me to the Moon, Sinatra Ballet”. In Act I, Robin Semmelhack and Joshua Reynolds took a youthful romantic journey in “Moonlight Serenade”, while Jonathan Mangosing soloed in “That’s Life” at the end of Act II. With a unique merging of classical and lyrical choreography, both pieces embody the characteristic style of this important San Francisco company – their niche, if you will. This amazing cooperative performance closed with a colorful, percussive extravaganza: “Vahines de Tahiti” from the Te Mano O Te Ra company. “Dances from the Heart 2” was a resounding success; please visit the Foundation’s website for information about upcoming events and be sure to make next year’s benefit part of your dance season – www.helpisontheway.org. 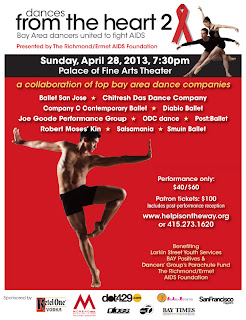 On the opening night of Alvin Ailey American Dance Theater’s week-long engagement at Zellerbach Hall, both the Director of Cal Performances (Matías Tarnopolsky) and the Artistic Director of AAADT (Robert Battle) took the stage to offer some brief remarks and greet the packed house. Both men shared their regards for and belief in the deep partnership between Cal Performances and Alvin Ailey American Dance Theater. This unique relationship is one for the record books – a long-standing commitment from both organizations, founded on support, dialog, artistic excellence, community outreach and unforgettable performances.

First on the bill was Kyle Abraham’s salute to jazz: 2012’s “Another Night”. A gorgeous ensemble work, this was a piece devoted to leg extensions and serpentine torsos, a challenge which the Ailey company can certainly take on. Abraham also included super-human tempo changes. One minute, the dancers were going eighty miles an hour, then they would stop abruptly and hold a still pose for some time. It was like watching biathletes. The biggest take away from Abraham’s energetic, crowd-pleasing composition is that, when it comes to dance and choreography, absolute perfection is not and should not be the goal. Art is about chance, risk, acumen and gumption. Jazz music has this and so does “Another Night”. The unison was not exact and the dancer’s interpretation of the choreography was divergent and personal. Structure was most definitely present while conformity was appropriately absent.

Act II began with Jirí Kylián’s “Petite Mort”; an artistic buffet of form and content. A renaissance piece in the sense that it has a little bit of everything, this short ballet does it all well. With a lack of accompaniment during the unison sword sequence, there is both vulnerability and aggression. Then we move to neo-classicism with the partnering section, as every movement marks moments in Mozart’s score. Kylián even infused a bit of humor as six rolling dresses come on the scene. Next came the first of Battle’s two works, “Strange Humors”, a duet danced by Renaldo Gardner and Michael Francis McBride. “Strange Humors” is a structural etude, featuring unison, canon and accumulation. Gardner and McBride were dynamic perfection as they embodied these different forms, which were all underscored by an unusually fabulous choreographic combination: tribal rhythms meet early 1980s disco.

Battle’s “In/Side”, a solo danced by Samuel Lee Roberts, was completely intense. Toggling between staid and chaotic, one of Roberts’ early turns (which ended with a collapse to the ground) elicited audible gasps from the audience. Battle injected several B+ poses, which in the ballet world, is also referred to as ‘preparatory position’. It seemed calm and quiet, but with an undercurrent – something big was going to happen next. As always, the program closed with Alvin Ailey’s 1960 masterpiece suite, “Revelations”. A modern work that will live forever, the most important thing about “Revelations” is that it transcends time. It is not only a brilliant historic piece, but holds deep meaning and applicability for today. Though the finale “Rocka My Soul in the Bosom of Abraham” often steals the show, the two best sections are “Fix Me, Jesus” and “Sinner Man”. “Fix Me, Jesus” is one of the most beautiful duets I have seen, ever. Danced flawlessly on this opening night by Linda Celeste Sims and Glenn Allen Sims, the short vignette transports you to another place. And, Ms. Sims’ promenade in ecarté cannot go unmentioned.

San Francisco Ballet’s eightieth anniversary season continues with an absolutely  delightful sixth program. For mixed performances, Artistic Director Helgi Tomasson tends to highlight the repertory breadth of his world-class company; often selecting three pieces from three very different genres or styles. With this set of works, he ventured outside this pattern, opting to pair one classical ballet with two very contemporary compositions. A little unconventional perhaps, but visually gorgeous and artistically compelling – exactly what one expects from an evening with the San Francisco Ballet.

Opening the program was Act III of Rudolf Nureyev’s 1966 “Raymonda” (choreography after Marius Petipa). Combining character and classical technique, “Raymonda” is a smorgasbord of sensibilities: extravagant and whimsical; folksy and regal. The grand pas classique, with its clean lines and stunning unison, had moments of quiet simplicity as well as instances of extreme challenge - the latter exemplified as all sixteen dancers completed a single jeté entrelacé. Dancing the title role, Frances Chung’s boureés spoke volumes, revealing strength, determination, pride and command. In addition to the  principal characters, four solos and two featured variations provided diversity and range to the work. Wanting Zhao (the first soloist) looked as though she was floating on air throughout a very difficult arabesque relevé sequence while Sarah Van Patten (soloist number three) combined a full back lay-out along with her developpé devant. I have to admit that I was a little torn about the men’s Pas de Quatre. Technically, it was fantastic; all four men quite brilliant, but something really distracted from this achievement. A couple of the guys just weren’t in character, which completely overshadowed their flawless technique. It goes to show that academic perfection can only take you so far.

“Ibsen’s House”, Val Caniparoli’s examination into the famed playwright’s treatment of gender, was an artistic triumph. The ballet began by introducing us to five different female characters from Ibsen’s body of work, the distinct personalities and unique struggles being matched by Caniparoli’s creative movement. Well-communicated and interpreted by each dancer, Lorena Feijoo as Hedda Gabler showed passionate drama; Sofiane Sylve as Nora Helmer oozed desperation; Dana Genshaft’s Mrs. Alving was clearly trapped; Courtney Elizabeth was untamed as Ellida Wangel and Sasha DeSola gave a tortured portrayal of Rebecca West. Though the women’s roles were of course predominant, the partnering of each was imperative to the story, and thus was given the proper attention, choreographically and artistically. “Ibsen’s House” is a beautiful ballet, with its only downfall being that it does go a little long.

Closing San Francisco Ballet’s sixth program was Edwaard Liang’s “Symphonic Dances”, another return appearance from last year’s season. With this 2012 ballet, Liang proves once again that he is a master of creating visual pictures through choreography and painting a living, breathing and evolving canvas before the audience’s eyes (think of the opening moments of his “Wunderland”). “Symphonic Dances” features three main pas de deuxs, the ending of each being one of these gorgeous, dramatic snapshot moments. And how Liang loves using second position (in plié, in relevé, in turns, in lifts); this wide stance was present here too, most notably in a recurring backwards sliding motif. The casting of Yuan Yuan Tan and Vito Mazzeo as the first pas de deux couple was the only puzzling element. Individually, both are fantastic dancers, but together, something is definitely missing. While nothing was wrong from a technical perspective, there was a definite lack of fervor, groundedness and passion in their pairing, which was especially apparent when the other two couples (Sofiane Sylve/Tiit Helimets; Maria Kochetkova/Vitor Luiz) danced their respective variations.
Heather Desaulniers at 6:39 PM No comments:
Share 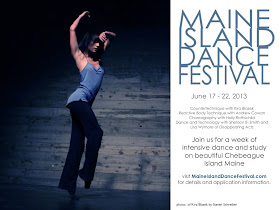